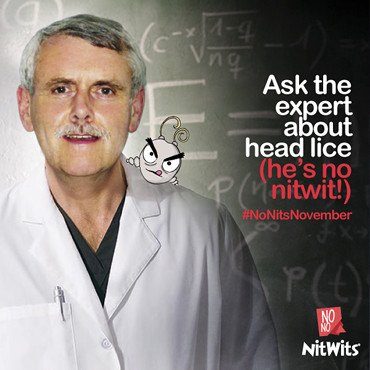 We recently asked our Facebook followers if they have any questions for our head lice expert and we were inundated! So here are the answers to the most asked questions, by Ian F Burgess from Cambridge's Medical Entomology Centre.

What’s the best way to remove all of the eggs on young children who won’t sit still for long?

No simple answer to this one. For little ones who like to sit on laps, probably taking them off one by one with finger and thumb nails is the easiest, even when they are sleeping. As they get older it gets more difficult but doing a few at a time and spreading the process over several days is probably the best approach.

What should I look for when choosing an effective treatment?

Ideally you should look to see if it has any clinical evidence to back up the claims. This work sometimes take a while to do so it may not be immediately available.

However, from a practical point of view you should avoid using old style insecticides because lice in most countries are now resistant and it defies common sense to apply poisons to children’s heads when alternatives are available.

Of the newer products there are two choices: physically acting treatments based on silicones and other synthetic oils or plant extract products based on essential oils or herbal ingredients. As a lot of children may be sensitive to essential oils, especially at the high concentrations needed to kill lice, these may not always be appropriate. Some essential oil products use lower concentrations and get their effects from other components of the formulation so it is worth looking either at the pack or online to see just how much of the plant extract is present.

The physically acting products probably have the least risk of producing side effects and from that group the most effective currently are those based on silicones like Dimethicone, but Dimethicone is only effective if it is in a silicone oil or mineral oil base – conditioners with small amounts of Dimethicone present have no effect at all.

Why does one child in the family get them but the other two (and the adults) don’t when showering and shampoos are the same as everyone else?

Most people think is that more or less as soon as one member of a family gets lice everyone in the household gets lice, but this just isn’t true. Quite often, within a family there are fewer close personal contacts than with friends so you can easily pick up lice from your friends but less likely from your siblings. We have come across several cases where two children in a household have lice but they come from completely different sources, as can be found out when one population of lice is completely resistant to an insecticide and the other is completely susceptible.

Rather than siblings, the person in the household who is probably most vulnerable to having lice passed on is Mum, because she is the one who normally has most close contacts with other family members.

There is one other factor that we can’t measure. Some people are just not attractive to lice, so either the lice don’t want to climb on to them or else in some cases they don’t want to take blood from them, so the lice starve to death within a few days if they cannot get off!

How did these critters even come to exist in the first place?

Head lice are just one species of blood sucking lice of the 500+ found on mammals. Parasitic lice generally evolved sometime during the time of the dinosaurs when the little book lice (bark lice) that lived in the nests of primitive mammals and birds, and fed on microscopic moulds and skin scales, started to move onto the nest inhabitants to feed directly there. Some of those started to take blood and the majority of the blood feeding lice live on small rodents. The human head louse is closely related to the chimpanzee louse and the molecular biologists have shown that the difference between chimpanzee lice and human lice about the same as the difference between chimpanzees and humans – both separated about 4.5-6 million years ago.

Of course the simple and short answer to the question is probably the shortest poem in the English language: “Adam had ’em”.