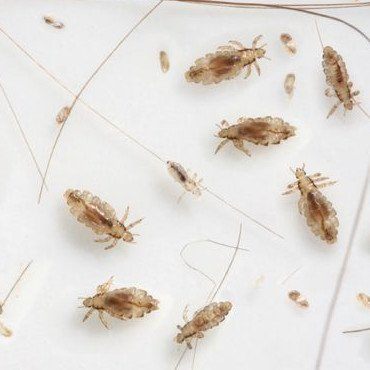 One symptom of head lice is an itchy scalp and excessive scratching. However, most people do not itch upon initial infestation. Head lice inject anticoagulants and other proteins when they feed on blood. The amounts a single louse injects are small. It is only after the lice population has increased that the host becomes sensitized to lice saliva and fecal proteins. It is the allergic reaction to the lice, not the proteins themselves that are responsible for the itching. The delay in detection allows the lice population to build and spread undetected and untreated.

So how many lice does one end up with? This completely depends on how long it takes for the lice to be detected. A louse’ lifecycle is quite short – just 35 days – but alot can happen in this time.

An extraordinary scenario: As the female louse can lay between 50 to 150 eggs in her lifetime, 60% of these nits are fertile. This means that if you were to have ten pairs of fertile lice successfully reproducing, with each female having a 60% success rate in terms of their nits, it would mean that one female louse can successfully produce 90 nymphs each. Multiply this by ten and you've got nine hundred nits. Using a conservative 75% survival rate for nymphs, you will have 675 adult lice by the end of the moulting period. At which point, these 675 adult lice will pair off. If 45% of these lice are female, and they have successfully mated with a male louse, it means that around 304 female lice will produce 45,600 new nits. This could potentially produce an entire colony which is truly astonishing.

This is certainly an extreme case but it does give you something to think about!